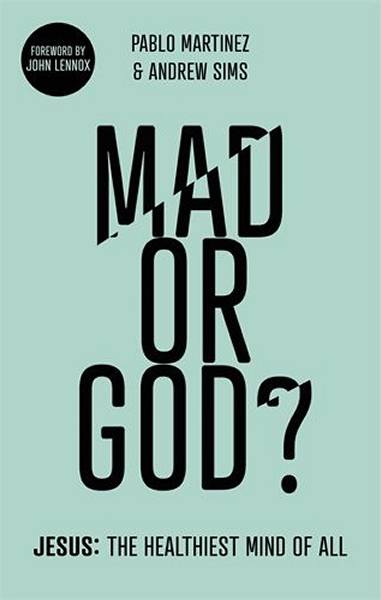 Jesus: the healthiest mind of all

“An important contribution to the evidence that Jesus is, as he claims to be, the incarnate Son of God. I am sure it will help to open many readers' eyes to the wonder of the person of Christ, and refresh and renew their faith and strengthen their confidence in him.” (Professor John Lennox)

“A man who was merely a man and said the sort of things Jesus said would not be a great moral teacher. He would either be a lunatic – on a level with the man who says that he is a poached egg – or else he would be the devil of hell. You can shut him up for a fool, you can spit at him and kill him as a demon; or you can fall at his feet and call him Lord and God.” (C.S. Lewis, Mere Christianity)

It was the famous quotation above – C.S. Lewis' “trilemma” – which inspired experienced psychiatrists Dr. Pablo Martinez and Professor Andrew Sims to write Mad or God? When Jesus was alive, the Gospels tell us that his enemies accused him of being “demon-possessed and raving mad” (John 10) and that even his own family feared that he was “out of His mind” (Mark 3). Over the years, the claim that Jesus was insane or mentally deranged has been used time and time again – especially by the New Atheists in recent years – to mock and discredit Jesus and his followers. Yet, many would agree with Bono when he said in an interview about his faith, “I cannot believe that a madman could have touched and inspired the lives of millions of people”. In response to these allegations against Jesus, the authors write, “we cannot remain silent when our professional experience enables and equips us to offer a robust defence of Jesus' mental health”. After all, Jesus' mental state is crucial in determining whether we can trust his words and the source of his authority – and indeed the whole basis of the Christian faith.

In this book, Martinez and Sims take us on a journey through the life of Jesus - as seen through psychiatric eyes. They examine his character, his life (in terms of his words and his deeds), his relationships, his reaction to adversity and his influence on people (both in his time on earth and afterwards) - these five areas are often combined by psychiatrists to provide an accurate assessment of a person's stability. Drawing on Bible references and psychiatric case studies throughout, the authors show how common features of mental illness are not evident in Jesus' life and how, while his words were compelling and often puzzling, this was not due to him being mad but rather to him speaking on a different level from his listeners. At the end of a thorough and convincing investigation, they conclude that “no mentally sick person or no evil man would ever have been able to speak or behave in the impeccable and influential way that Jesus did, unless he really was what he claimed to be: God” and that Jesus had “the healthiest mind of all”.

What a wonderful fresh and refreshing treatment of the life and personality of Jesus Christ, the greatest individual and centrepiece of human history. This book demonstrates both the wholeness of Jesus Christ - God become man - and the reality that he brings wholeness to any individuals who put their trust in Him. Readers will find themselves irresistibly attracted to him in the pages of this book. (Lindsay Brown, former General Secretary IFES and International Director of Lausanne Movement)

Mad or God? is a unique and unusual book about Jesus, written by two Christian psychiatrists. Taking into account Jesus’s mental state, consistency of life, character, and relationships as portrayed in the gospels, Martinez and Sims show that there is not only a lack of evidence that Jesus was ever mentally unwell, but that he should be considered to have had “the healthiest mind of all”. If it was ever too easy to dismiss the claims of Jesus on the grounds that he must have been mad, this book makes it difficult again. Don’t read it if you don’t want to take Jesus seriously! (Professor Chris Cook, Durham University)

A fresh and unconventional treatment of the ‘mad, bad or God’ trilemma, crafted by G.K. Chesterton (The Everlasting Man) and popularised by C.S. Lewis (Mere Christianity). This surprisingly touching book takes us on a fascinating journey into the psyche and character of Jesus of Nazareth. By looking at specific pathologies they have observed and treated as clinicians, the authors expose the lofty but non-specific ‘craziness’ allegations of the New Atheists as lazy and unfounded assertions. But, much more wonderfully, their investigation reveals the healthiest mind of the most attractive person ever to walk on planet earth - suggesting it would take more than a Jesus to invent this Jesus. It left this, reader, needing a quiet place to worship. (Rev. Richard M. Cunningham, Director UCCF)

If the question of the sanity of Jesus holds you back then read this book. Mad or God? provides insight that only professional psychiatrists can bring. Prepare to be taken on a journey. (Sharon Dirckx, Oxford Centre for Christian Apologetics and author of ‘Why?: Looking at God, evil and personal suffering’)

Fresh, arresting and helpful, Mad or God? is a highly original examination of the most challenging question posed to us as humans. Well worth reading and exploring. (Os Guinness, author of ‘The Journey: A Thinking Person's Quest for Meaning’)

Finally, a credible, psychological investigation into the mind of Christ. Not only do Pablo and Andrew provide a compelling apologetic for the diving sonship of Jesus they do much to compassionately educate the church about the nature of mental wellbeing. Through their understanding of Jesus mind and emotions the authors reveal a model of emotional discipleship that has long remained hidden from the Christian community. Their work will provide conviction, assurance and hope to many. (Rev. Will Van Der Hart, Director The Mind and Soul Foundation)

Two eminent psychiatrists, with a lifetime’s experience in the diagnosis and treatment of mental disorders, apply their skills to the question of Jesus’ mental health with astounding conclusions. Drawing deeply on the Gospel accounts of Christ’s life and ministry they find not the slightest shadow of mental imbalance but a mind without parallel in history. The coherence of his discourse, the ethical richness of his teachings, the profound influence of his words and the depth of his relationships point to his true identity and explain his life-transforming power. A masterly blend of clinical wisdom, biblical exposition and personal testimony. (Peter Saunders, Chief Executive of Christian Medical Fellowship)